Compared with issue #1 the head of the cowboy is exactly similar, and the crude horses match Lubbers horses on other covers. 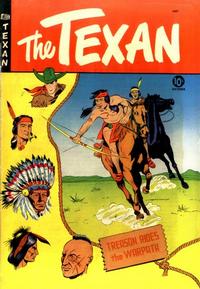 Gunsmoke Gets Action (Table of Contents: 1)

Larsen can be spotted by his heavy dark shades under the nose, and small squinting eyes. Also the giant hats in the neck, looking like big butterfly wings, and awkward movement of bodies.

Indians on Horseback (Table of Contents: 5)

This story is credited to Doug Wildey in The Hawk, but Vadeboncoeur has "Ravielli ???", so it is very uncertain.

Registered for Ransom (Table of Contents: 7)