The Keepers of the Crypt! (Table of Contents) 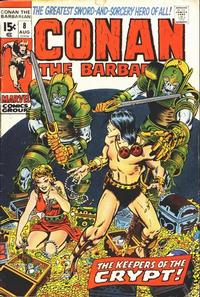 The Keepers of the Crypt (Table of Contents: 1)

Conan the Barbarian!
Genre
sword and sorcery
Characters
Conan; nameless mercenary (dies); Keepers of the crypt; Jenna; soldiers
Synopsis
Conan comes across the ruins of the ancient city of Lanjau, where he battles a giant lizard. He meets a nameless mercenary and they both decide to work together in order to retrieve the lost treasure of Lanjau. Undead creatures, keepers of the crypt, try to stop them but are defeated by sunlight. An earthquake buries the mercenary, Lanjau and the treasure. Conan comes to a nearby village, where he once again meets Jenna. When soldiers come to arrest him, Conan and Jenna flee the village on a horse.
Reprints

Based on the unfinished story fragment Hall of the Dead by Robert E. Howard.

Story page count is 20 (numbered) in book, but since pages 12 and 13 are half-pages (shared with adverts), the total comes to 19 pages in this index. In reprints, the two halves are normally joined back into one.

The Hyborian Age of Conan (Table of Contents: 4)

Map of the lands of Hyboria based on a map prepared by Robert E. Howard.