Sal Buscema pencils and inks confirmed by the owner of the original piece of cover art (May 25, 2007). 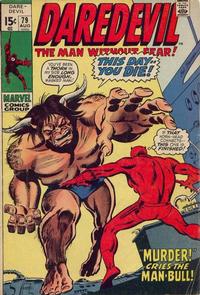 Part 2 of Mr. Kline story in DD. Play "Count Man-Bull's Toes" as he keeps dropping from five to four throughout the issue. On story page four, DD mentions the band "Blood, Sweat and Tears" as well as race car driver Richard Petty and the Firecracker 400 during his banter. On story page 15, Stan Lee and wife Joan appear in two panels in a street scene and Stan mentions going home to write "Spider-Man." DD notices him and refers to him as "fearless leader."

First Line of Dialogue or Text
Dear Stan, Gerry and Gene, On the whole, DAREDEVIL #76 was just mediocre.