They Shoot Hulks, Don't They? (Table of Contents)

Title is paraphrased from the movie "They Shoot Horses, Don't They?", released in 1969, starring Jane Fonda. 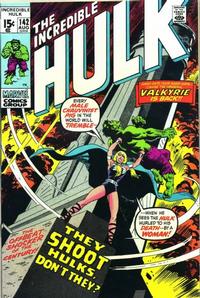 They Shoot Hulks, Don't They? (Table of Contents: 1)

Job Number
517Z
Genre
superhero
Characters
Hulk [Bruce Banner]; The Valkyrie [in Samatha Parrington's body]; Thunderbolt Ross; Glenn Talbot; Tom Wolfe; the Enchantress (villain)
Synopsis
The Hulk is the focus of a social event as the Parringtons bring him to a party but their women's lib daughter is given the powers of the Valkyrie by the Enchantress and battles the jade giant.
Reprints

Splash page notes: "Inspired by the book Radical Chic by Tom Wolfe." The next appearance of Valkyrie is in Defenders (Marvel, 1972 series) #4.