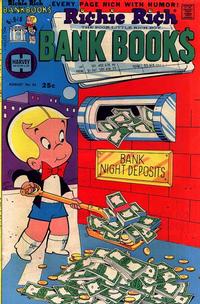 The Attack on Vault Seven, Part 1 (Table of Contents: 1)

First Line of Dialogue or Text
Mom seems to be in a happy mood today, Dad!
Genre
children

[The Attack On] Vault Seven, Part 2: How He Outsmarted a Genius (Table of Contents: 3)

The Phone Phony (Table of Contents: 4)

Genre
children
Characters
Mayda Munny; Gloria Glad; Richie Rich; Cadbury
Synopsis
Mayda tries to trick Gloria into believing that Richie was two-timing her by pretending to talk to Richie on a video phone while her servant holds up a large photo of him on the video phone. This trick has succeeded until Gloria discovers the truth about it.

The credits are based on the fact that in the story Gloria brings Mayda a record album that says "Ernie's Cologne: A Jacobson Medley."