[Wow! How much did he deposit?"] (Table of Contents)

Genre
children
Characters
Richie Rich; unnamed pedestrian
Synopsis
A sign at the bank states that depositors will receive gifts with each deposit, and Richie is walking away with an armful of gifts. 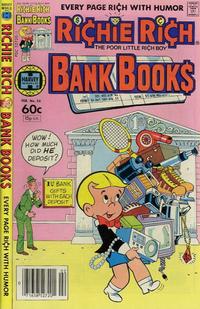 Journey to Nowhere (Table of Contents: 1)

Genre
adventure; children
Characters
Richie Rich; Richard Rich; Gloria Glad; Cadbury; spacemen
Synopsis
Richie wishes there was someplace to go on his vacation that he hasn't already been, and soon gets his wish when he and Gloria are abducted by spacemen.
Reprints

Story continues in "This is Magna", later in this issue.

This is Magna (Table of Contents: 3)

Continues from "Journey to Nowhere", earlier in this issue, and continues in "Home Again", later in this issue. Page numbering begins again at page 1.

Continues from "This is Magna", earlier in this issue.

First Line of Dialogue or Text
Oh, my! Please, Richie! Remove your money from that table! We're having company!
Genre
children
Characters
Richie Rich; Regina Rich; Cadbury; Aunt Prissy; Uncle Herbert
Synopsis
Richie's mother asks him to put his allowance money out of sight, so that his aunt and uncle won't see it, since they are offended by displays of wealth. Unfortunately, Richie hides his money in all the wrong places.
Reprints

Richie receives a rare spanking in this story.