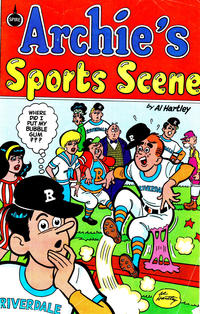 Genre
teen; humor
Characters
Archie Andrews; Moose Mason; Reggie Mantle; Jughead Jones; Dilton Doiley; Coach Kleets
Synopsis
Archie is up to bat for the baseball team, but finds himself stuck to the bench by Jughead's gum. Quickly, Moose offers Archie his pants, but they are too big and cause Archie lots of trouble.

We Get Letters! (Table of Contents: 5)

Fan letters are answered by the characters with a religious slant. Appears between pages 3 and 4 of the previous story.

The Winners (Table of Contents: 6)

Pg. 1, panel 2 of this story includes a look at the cover for the "Tom Landry and the Dallas Cowboys" comic also published by Spire Christian Comics.

The Game Plan! (Table of Contents: 7)