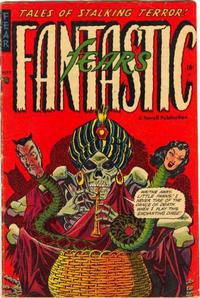 The Zombi's Bride (Table of Contents: 2)

Genre
horror-suspense
Synopsis
Roy Gifford inspects a banana plantation in Hispaniola. He encounters a master "Zombi" and his army of servants. Gifford tries to put an end to his business.
Reprints

Narrated by the "Voodoo Doctor". Story seems to be an outside contribution, not Iger Shop.

Genre
horror-suspense
Characters
Christopher Fenn; Lady Debra Seeley; Drum (Fenn's dog); Alf Barnes
Synopsis
Ghostly druids haunt a manor in England. Psychic investigator Christopher Fenn uses a dematerializing machine of his own invention. With it, he turns himself, his dog Drum, and Lady Seeley into immaterial ghosts. They use their new form to better negotiate with the ghost druids. Fenn uses a branch of mistletoe to negotiate with the druids. Drum remains a ghost at the end of the story, protecting the area.
Reprints

Previous indexer suggested Carl Burgos ? for pencils. This story is similar to the Christopher Fenn story from Fantastic Fears #3, with notable differences. The overall story arc of checking out a case for a wealthy woman after a man named Alf is murdered by ghosts on the property is repeated.

Genre
horror-suspense
Synopsis
Ships are caught in the treacherous Sargasso sea and attacked by a seaweed monster named "Sargasso".
Reprints

Previous indexer suggested Matt Baker ? for pencils.
Though Baker has been credited for stories in the sister title "Voodoo" in 1952, this is more than improbable in autumn 1953.