First Line of Dialogue or Text
Quickly, brothers! This is a very restless one!
Genre
horror-suspense 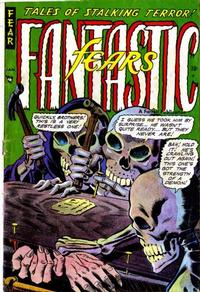 My Coffin Must Wait (Table of Contents: 1)

Genre
drama
Characters
Seth Bates; Martha Bates; Doc Wilcox; Mr. Townsend
Synopsis
Seth is informed that his wife Martha is dying. He vows to fulfill her last wish, driving her through a blizzard, defeating some bank robbers who want to hijack his car, and crashing through a police roadblock to reach town. Seth says he promised Martha she'd have her photograph taken one last time, and he gets Mr. Townsend to do it just before she dies.
Reprints

Caught in the Graft (Table of Contents: 2)

Genre
crime; horror-suspense
Characters
Sam Green; Maxie; Jim
Synopsis
Corrupt city official Sam is caught and sentenced to prison. Since he suffers from claustrophobia, Sam can't tolerate confinement. Working in the prison morgue, Sam learns the bodies are subsequently sent to the city morgue, a building constructed under his crooked supervision. Sam climbs into a coffin and escapes from prison, but when his henchman Maxie arrives at the city morgue to free him, he discovers there are thousands of "ice boxes" (morgue drawers) and he doesn't know which one Sam is in.
Reprints

Genre
adventure
Synopsis
Dan finds his war comrade Don in Africa, now in possession of a valuable jewel mine.

Genre
horror-suspense; science fiction
Characters
Lawrence Dawson (first appearance, death); Dr. James Doyle; Dr. Harrell
Synopsis
Dawson suffers from brittle bone syndrome, but Dr. Doyle invents "muiclac" to cure him. He discovers this makes him "elastic" and murders Doyle to keep his secret. However, Dawson's face becomes permanently twisted and he goes to scientist Harrell, who has a formula to restore him to normal. Dawson kills Harrell before he learns the proper dosage. When the police arrive to arrest Dawson, he's just a puddle on the floor.
Reprints

This was Ditko's first sale to a publisher, although not his first published work. Info per Robin Snyder and Bruce Hamilton.
"Muiclac" is "calcium" spelled backwards.

Escape from Hell! (Table of Contents: 5)

Genre
fantasy-supernatural
Characters
Richard Benton; Satan
Synopsis
Criminal Richard Benton dies and goes to Hell. He's sentenced by Satan to drag a boulder around for eternity. Benton struggles to climb a mountain to freedom, plagued by demons and hindered by the boulder, only to learn "there is no escape from Hell!"
Reprints

Temple of the Beast (Table of Contents: 6)

Genre
horror-suspense
Characters
Sam Graves; Anne Graves; Sivak [as Kavis]
Synopsis
In Siam, American tourists Sam and Anne buy "the hand of Sivak," a local god. The vendor later buys it back from Sam but the hand comes alive and strangles him. Anne recovers the hand and mails it to the USA. On the ship home, a mysterious man demands the hand from Sam and throws the American overboard when he learns the hand isn't there. Back home, Anne is greeted by fellow passenger Kavis, who reveals himself to be Sivak. Anne is strangled and Sivak can now go home with his hand.
Reprints