Back By Reader Demand! The Ominous Owl! (Table of Contents)

Designed by Marie Severin as disclosed in letters page of Daredevil #84.

Hayden suggests the cover lettering is possibly by Sam Rosen. 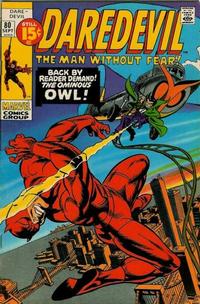 Part three of Mr. Kline story in DD. In the verbal snafu department: There is a string of dialogue in the story where DD says, "Who does your dialogue? Jane Austin? Ooops. Hope I haven't insulted anyone's literary tastes." Of course, the irony is that literary sensibilities may have been offended because the author's name is actually spelled "Austen."

While the Cat's Away, the Bullpen Will Play! (Table of Contents: 2) (Expand) /

First Line of Dialogue or Text
Dear Stan, Gerry and Gene, I am writing this letter...