The comic adapts material from "One Thousand and One Nights," also known in English as "The Arabian Nights." The original work is a collection of Middle Eastern and South Asian folklore dating from the Islamic Golden Age, roughly contemporaneous with the European Middle Ages. 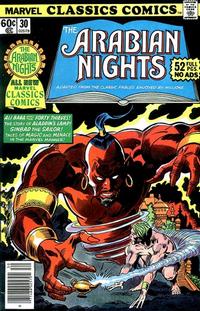 About the Author (Table of Contents: 1)

Inside front cover contains the indicia and credits for this issue along with an article about the Arabian Nights.

The Arabian Nights (Table of Contents: 2)