The on-sale date is from the publication date recorded in the Catalog of Copyright Entries, Part 2, Periodicals, 1942, New Series, Vol. 37, No. 4. 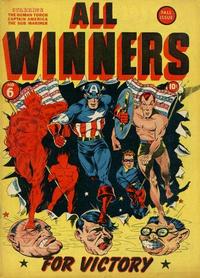 Found on inside front cover. Sequence and all info added by Craig Delich 2008-7-24.

Splash page gives feature as "The Minute Man and the Human Torch". Writer credit from textual analysis by Lou Mougin.

The Stone-Man Slayer! (Table of Contents: 4)

Marvel at the World's Greatest Heroes in the Most Exciting Adventures You've Ever Read! (Table of Contents: 5) (Expand) /

The Woim Toins (Table of Contents: 6)

Genre
adventure
Characters
Oswald Perkins; Mr. Styles; "The Boss" [Christopher Fitzgerald Wampus] (villain); Willy Wickerschnikle (villain)
Synopsis
When "The Boss" sells Willy a bunch of worthless gold stock in the Gleeful Gopher Mine, both are estatic.....that is until "The Boss" believes the stock is really worth something and attempts to buy it back.
Reprints

Genre
superhero
Characters
Captain America [Steve Rogers]; Bucky [Bucky Barnes]; Baron Jujitso (villain, introduction, death); Mock Mikado (villain)
Synopsis
In the 19th Century, the Japanese Emperor's wife has two sons.....something that could lead to a civil war between the two later down the road. However, one, the Mock Mikado, decides to conquer the U.S. before his brother (who is the leader of Japan) does, then conquer his brother's throne as well!
Reprints

First Line of Dialogue or Text
Here comes a new nemisis [sic] of evil...
Genre
superhero
Characters
The Black Avenger [Jerry Carstairs] (introduction); Kurt Weidner (villain, death)
Synopsis
Jerry is asked by the FBI to take the place of a member of a Nazi spy ring who looks just like him!
Reprints

Writer, pencil, and ink credit update by Greg Theakston (2006-4-1). Writer/artist revision by Craig Delich on 2008-7-24 from Robin King? to Ed Robbins (the Who's Who shows Robbins working on this feature).

Spies Use Their Heads! (Table of Contents: 11)

Genre
superhero
Characters
Sub-Mariner [Prince Namor]; J.J. Harris; John Feather-in-Hat; Gojo (villain, introduction, death)
Synopsis
Namor, after finding a man scalped, tracks down a nefarious Japanese gang whose leader is tracking down and killing American spies in Japan, who are returning to the States with vital Japanese info hidden on parts of their bodies!
Reprints