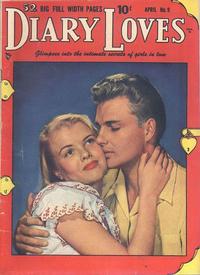 Genre
romance
Characters
Terry Shane; Jeff Madison; Ben Grove; Mr. Shane
Synopsis
Terry Shane stows away on a plane piloted by Jeff which is delivering supplies to her father’s oil fields in Venezuela. The aircraft crashes in the jungle, stranding Terry, her boyfriend Ben, and Jeff. Jeff drives the others mercilessly, saving their lives, then collapses from his injuries when they reach civilization. Terry realizes she loves Jeff, not Ben.

Genre
crime; romance
Characters
Jill Mason; Don Jackson; Thad Brady (death); Celia; Mrs. Jensen; Mr. Carter
Synopsis
Jill has a crush on her neighbor Thad, and writes fictitious accounts of their dates in her diary. Thad is murdered by an intruder and Jill is arrested, since her diary implies they had a relationship. Lawyer Don Jackson forces Jill to admit she made everything up and gets her acquitted of the crime. They fall in love.

You Can Play Today's Most Popular Instrument Instantly! (Table of Contents: 4) (Expand) /

I Danced With Heartbreak (Table of Contents: 7)

Genre
romance
Characters
Claire; Don Williams; Mr. Haddon; Doris Gerrold; Rita
Synopsis
Don saves dance instructor Claire from being injured by a falling tree. She rejects his romantic advances but he shows up for dance lessons. Claire starts to fall in love with the wealthy Don, but he tells her he’s engaged to the refined Doris. Claire recognizes Doris as a gold-digger but doesn’t think Don will believe her. Don pretends to have lost his fortune and Doris breaks their engagement. Don and Claire will be married, instead.

Blouses and Skirts (Table of Contents: 9)

Under False Pretenses (Table of Contents: 12)

Genre
romance
Characters
Mary Harmon; Brad Connelly; Jim
Synopsis
Mary arrives in the big city and is greeted by Brad, who thinks she’s the visiting sister of his friend Jim. Mary falls in love with Brad as he escorts her around the city, but finally confesses the truth. Brad admits he soon learned she was the wrong Mary, but went along with the deception because he had fallen in love with her.
Reprints