Kiss of Ecstasy (Table of Contents) 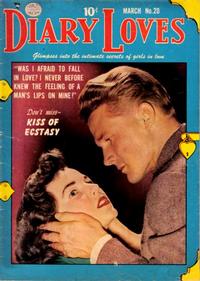 Genre
romance
Characters
Noreen Daly; Marcia Landers; Larry Travis
Synopsis
Noreen and her friend Marcia compete to be Queen of the Winter Carnival and Noreen is chosen. Noreen is engaged to Larry, but when he asks her to accelerate their wedding date and move with him to San Diego, she is conflicted because that would mean she’d leave town before being crowned. Neither will give in and Larry breaks their engagement. At the last minute, Noreen realizes her love for Larry is more important than being Queen, and she asks that Marcia be given the crown.
Reprints

Genre
crime; romance
Characters
Joyce Stevens; Matt Foley; Barney; Roddy Parks (villain)
Synopsis
Nightclub cigarette girl Joyce is rescued from a masher by Roddy. They fall in love but Joyce discovers Roddy is a criminal. He’s caught by the police in her apartment, and she leaves town due to the scandal. She gets a job in an Arizona resort run by Matt. They fall in love and become engaged, but Roddy shows up and demands money. Matt and Joyce subdue Roddy. Matt says he knew who Joyce was from the first, but still loves her.

Art identification by Jim Vadeboncoeur, Jr. He think it looks like swipes due to the perspective/proportion (April 2011).

Terror in My Heart (Table of Contents: 4)

Genre
romance
Characters
Anna; Art Carling; Marge; Anna's mother; Anna's father
Synopsis
Department store sales clerk Anna lives in a tenement apartment with her immigrant parents. She meets Art, son of the store owner, at an employees’ party and they fall in love, but she hides her humble origins from him. When Art stands her up for a date, she goes home and finds him happily conversing with her parents. He reproaches her for her snobbery, and says his father started out poor as well. Anna realizes her parents are decent people who sacrificed to help her. She and Art get engaged.
Reprints

My Mother's Diary (Table of Contents: 5)

Statement of the Ownership, Management, and Circulation (Table of Contents: 6)

Kiss of Ecstasy (Table of Contents: 7)

You'll Play Piano With Both Hands the First Day (Table of Contents: 8) (Expand) /

Gorgeous Dresses for You (Table of Contents: 10) (Expand) /