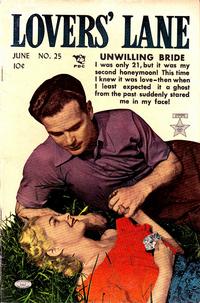 Genre
romance
Characters
John; Robbie; Ruth
Synopsis
Ruth is jealous when she learns her husband John was at a party with a former girlfriend in her absence. She wonders if he knows about her first boyfriend, Robbie: she ran into him after marrying John, and discovered she had no longer had feelings for him. Ruth confesses this to John and he admits he kissed his ex-girlfriend as well, but in a “brotherly” way. John and Ruth love only each other.

If You Kiss and Tell (Table of Contents: 2)

Genre
romance
Characters
Cliff; Hazel; Ralph Baker; Tony Chandler
Synopsis
Divorcee Hazel dates Cliff and thinks he’ll propose, but he says he couldn’t support her in the manner she deserves, and he’s taken a job “a thousand miles away!” She next dates Ralph, son of the owner of the store where she works, but he refuses to marry her because she’s divorced. Her ex-husband Tony suggests he and Hazel become lovers and she turns him down. Hazel tells Cliff that she’ll marry him and move with him to his new job.
Keywords
divorce

Genre
romance
Characters
Blanche; Dave
Synopsis
Blanche eloped with Craige at age 17, then got an annulment. Several years later, she marries Dave. They leave on their honeymoon, and a storm forces them to stay at the same hotel where she’d spent her first wedding night. When Dave finds out, he assumes Blanche was “really married, in the full sense of the word... it’s just like marrying a divorced woman...” Blanche rushes out into the storm and has to be rescued by Dave. Dave apologises, says he loves Blanche anyway, and then Blanche tells him that she also ran out on Craige on her wedding night (so she’s still a virgin).

The word "virgin" isn't used in the story but it's clear that this is what Dave is referring to, when he says Blanche concealed that she was "really married, in the full sense of the word" at age 17.