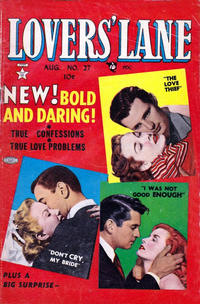 Genre
romance
Characters
Bryan; Larry; Nona
Synopsis
Secretary Nona quits her job because her boss Bryan—whom she loves—is going to marry someone else. Nona weds Larry on the rebound, then learns Bryan’s engagement was cancelled. Larry is jealous of Nona’s reaction to this news, and she leaves him. She goes back to work for Bryan, who admits he loves her and offers to make her his mistress, not his wife. Nona reconciles with Larry.

Genre
romance
Characters
Elaine; Kevin; Louise; Ralph Donalds; George
Synopsis
Kevin proposes to Louise but she’s inexperienced with men and isn’t sure she loves him. Louise and her roommate Elaine go on vacation. Louise dates Ralph but is upset when he kisses her. She keeps to herself for the rest of her vacation, but decides to invite Kevin to the resort for the final night’s dance. When he arrives, she accepts his marriage proposal, because now she knows she loves him.

Not Good Enough (Table of Contents: 4)

Genre
romance
Characters
Doug Fairchild; Jane; Mrs. Standish; Myra Standish
Synopsis
Myra accepts a date from Doug, even though her friend Jane—who had an affair with him before--warns her that he’s a wolf. Doug claims Myra is different and he respects her. They fall in love and get engaged, but Myra discovers Doug is jealous and controlling. When he asks her to end her friendship with Jane, Myra refuses and they break up. Doug calls Jane for a date and Myra and Jane team up to humiliate him.

Genre
romance
Characters
Emily Wentworth; John Wentworth; Doc Bailey
Synopsis
On their honeymoon, Emily confesses to her husband John that she was raped at age 18 and now can “never love anybody in the way I was expected to—-never!” John angrily leaves her alone and says they will annul their marriage. When they gets home John falls ill and Emily devotes herself to nursing him. In his delirium, John apologises for his attitude and when he recovers, Emily says they can make their marriage work.
Keywords
frigid; honeymoon; rape

The word "rape" is not used: Emily says she and a boy "wandered off into the woods, and there I had a terrible experience. He made love to me! I thought at first that it would be fun, but it wasn't fun, it was terrible!"