They Said I Was Boy Crazy (Table of Contents) 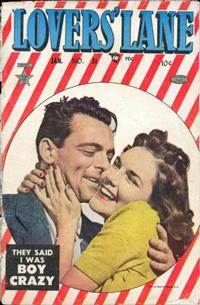 Genre
romance
Characters
Mayor Link Walters; Mayor Pop Mitford; Nora Mitford
Synopsis
Lawyer Link returns to his hometown and decides to run for mayor, even though his fiancee Nora’s father is the incumbent. Nora breaks up with Link as a result. When Link wins the election, Nora works to undermine his attempts to improve the town. But when her father has a heart attack, the town’s lack of a hospital nearly proves fatal. Nora’s father recovers and volunteers to help Link raise money for a local hospital, and Link and Nora reconcile.

The Secret of Treasure Cave (Table of Contents: 3) (Expand) /

Genre
romance
Characters
Charlie Fuller; Rick Harlow; Rudy Keefer; Terry Sanders
Synopsis
Photographer Terry works with reporter Rick and they are also romantically involved, but she catches him flirting with another worker and says they’ll only be co-workers from now on. Terry is attracted to Rudy, reporter for a rival newspaper, but when Rudy makes a pass, Rick shows up and they fight. Both men depart, leaving Terry stranded on a beach, shoeless, at 2:30 in the morning.

Art identification from Jim Vadeboncoeur, Jr.
Story continued from previous issue, and to be concluded in the next issue.
Listed as "Front Page Love Story: Chapter Two."

Genre
romance
Characters
Joan Herrick [also as Joan Fields]; Miss Catterby; Mrs. Herrick; Terry French; Tom Branson; William Herrick
Synopsis
Joan’s parents forbid her to date, saying she's "boy crazy." She runs away from home and gets a job as a model. Joan becomes photographer Tom’s favourite subject and they fall in love, but she’s hesitant because of her parents’ previous comments about her emotional state. Joan’s parents come to take her home, but Tom discovers they are only her foster parents, and are trying to keep her single. She'll inherit a fortune if she gets married before age 21, otherwise the foster parents keep the money. Tom and Joan foil that plan.
Keywords
modeling

"Baron" was previously presumed to be Tom, rather than Allen Baron.