[Surrender to Love] (Table of Contents)

The cover refers to the interior story "Surrender to Love," but the two male characters on the cover do not really resemble their counterparts inside (Cliff has blonde hair and is clean-shaven inside, for example). 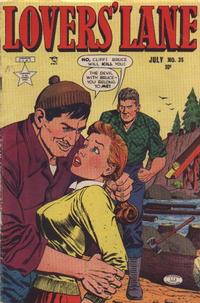 Romance In Mexico (Table of Contents: 1)

Genre
romance
Characters
Alice Cahill; Hector; Johnnie [Juan] Gonzales; Lorry; Hector
Synopsis
Tourist Lorry falls in love with bullfighter Johnnie, who has American and Mexican citizenship. However, his devotion to his career causes them to break up. Upset over this, Johnnie performs badly and is gored. In the hospital, he tells Lorry he was going to quit anyway: he prefers to marry her and work for his father in Brooklyn.
Keywords
bullfighting

Should You Write a Love Letter? (Table of Contents: 2)

Love's No Gamble (Table of Contents: 3)

Genre
romance
Characters
Al; Carol; Jim; Ken Moss; May; Mrs. Hennessy; May
Synopsis
Carol agrees to marry fellow worker Jim even though she doesn’t love him, because “maybe I won’t meet anyone else!” While Jim is away, Carol goes to the horse races with a neighbor and meets tout Al. She becomes a regular gambler and hocks Jim’s engagement ring to bet on a horse, which loses. Telling Jim the ring was stolen, Carol falls in love with insurance investigator Ken. Ken redeems the ring and gives it to Carol, who decides to confess to Jim. When he hears the story, Jim breaks up with Carol and now she’s free to marry Ken.

The Flirt (Table of Contents: 5)

Genre
romance
Characters
Connie; Eddie McConnell; Frank; Jeanne Cantrell; Steve; Ted
Synopsis
Jeanne flirts with many fellow college students but takes none seriously. Her roommate Connie warns her this is dangerous, and Connie’s boyfriend Steve sets up Jeanne with his friend Eddie to teach her a lesson at a college dance. Eddie forces Jeanne to drink and smoke and make out in his car, until she admits she’s just a tease. Eddie, remorseful, confesses the whole plot. Jeanne and Eddie decide to start their relationship over again, honestly this time.

This story is narrated by Jeanne first, and then Eddie's narration takes over.

Surrender to Love (Table of Contents: 6)

Genre
romance
Characters
Bruce Conroy; Cliff Morlan; John Kirby; Kate Kirby
Synopsis
Kate’s father runs a logging company and warns her about lumberjacks like Cliff. Kate falls in love with new foreman Bruce, over her father’s objections. Cliff sabotages the operation to get Bruce fired, but is caught trying to blow up a log flume. Kate’s father apologizes to Bruce and gives Bruce and Kate his blessing.
Keywords
lumberjack