More Deadly Than the Atom Bomb! (Table of Contents) 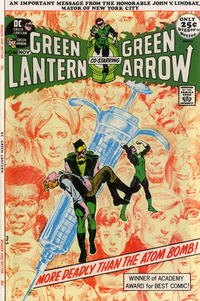 Job Number
S-922
Genre
superhero
Characters
Green Lantern [Hal Jordan]; Green Arrow [Oliver Queen]; Roy Harper [Speedy]; Dinah Drake Lance [Black Canary]; Salomon Hooper
Synopsis
Having discovered that Roy is a junkie, Green Arrow sets out to bring the drug traffickers down. Green Lantern returns to Oliver's building and finds Roy curled up in the basement. He takes Roy to Dinah's to straighten out and heads out to find Green Arrow, who has been knocked out by the drug dealers and tossed into the harbor to drown. GA escapes just as GL arrives to take out the goons who threw him into the water. Together the two trace the drugs to pharmaceutical magnate Salomon Hooper and put him out of business. But Roy explains that drugs are not the root problem, just a symptom of it.
Reprints

An Important Message for You! (Table of Contents: 3)