Bat Out of Hell! (Table of Contents) 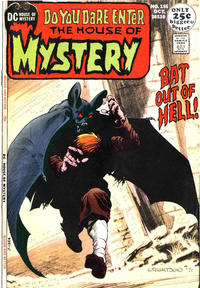 [Welcome to the House of Mystery!] (Table of Contents: 1)

Bat Out of Hell (Table of Contents: 2)

Following discussion on GCD Main, inker changed to George Roussos with a query on Meskin as inker. Meskin and Roussos had a collaborative relationship from the 1940s onwards (information from Lambiek).

While Meskin and Roussos DID collaborate extensively during this period, their inking styles were quite distinct. A look at the faces in close up will usually reveal which man has inked them. This looks like pure Meskin.

Job Number
G-309
Genre
horror-suspense; science fiction
Characters
Cain (host); Jason; Valerie; Peter
Synopsis
Peter and Jason were competing to be the pilot on the first mission to Mars until Peter killed Jason to ensure he would be the pilot.
Reprints

Story has Swamp Thing and Parliament of Trees similarities or overtones, and is listed in Overstreet as "Swamp creature story by Wrightson similar to Swamp Thing." One creature looks like The Heap plus there is an Old Ones / Elementals ("creatures of the old hills") vibe.

Job Number
J-1344
Genre
science fiction
Synopsis
A man with amnesia is forced to steal against his will by a disembodied head. He is a robot, and the head belongs to his creator. When the police trail the robot home, the scientist tries to escape, but he and the robot end up falling to their deaths.
Reprints

Trick or Treat (Table of Contents: 10)

Job Number
G-390
Genre
horror-suspense
Synopsis
A lethal virus which can only be destroyed by contact with water is being transported on the Titanic.
Reprints