War At the Bottom of the World! / "Some Call It...Witchcraft!" (Table of Contents) 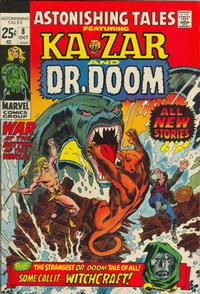 The Battle of New Britannia! (Table of Contents: 1)

Job Number
697 Z ?
Genre
jungle
Characters
Ka-Zar; Zabu; (Barbara) Bobbi Morse (full name not revealed until Astonishing Tales #12); Germans of Lost Lake (introduction, villain); British of New Brittannia (introduction); Paul Allen (introduction, full name not revealed until Astonishing Tales #12); Wilhelm (New Britannian); Reggie (New Britannian)
Synopsis
While flying to see Ka-Zar in the Savage Land Barbara Morris and Paul Allen crash, with Paul being saved by Ka-Zar and Barbara being rescued by the British of New Britannia. Ka-Zar and Paul don't know that Barbara has been saved so they venture into the Lost Lake to save her.
Reprints

This story is continued in issue #10.

Pick a Pair of Winners From Mighty Marvel! (Table of Contents: 2) (Expand) /

This Badge Bedeviled! (Table of Contents: 3)

Marvel Bullpen Bulletins: While the Cat's Away, the Bullpen Will Play! [October 1971]; Roy's Rosterum (Table of Contents: 4) (Expand) /

Includes letters from (and answers to) Richard K. Hall, Martin Britton, Wayne H. Reese, David Kalis and Mike Towry. Includes panels from the Ka-Zar stories in issue #4, #5 and 2 panels from the Dr. Doom story in issue #4 and a promo for Marvel Feature #1 with small headshots of the Defenders [Dr. Strange, Hulk [Bruce Banner] and Sub-Mariner].