[Man in front of wall of comics] (Table of Contents) 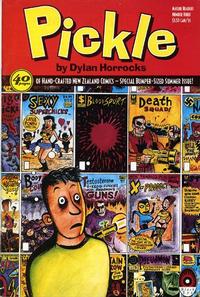 Letter From Hicksville (Table of Contents: 1)

Synopsis
Mention that Pickle #1 made the Comic Journal's Hit List.

Synopsis
Leonard gets a "guide book" to Hicksville which ends up being "The Last Fox Story" by Dylan Horrocks.
Keywords
adult

Originally published as 104 page mini comic. Was originally done for the last issue of Fox Comics, but that issue was never published.

A Note From The Artist (Table of Contents: 4)

Synopsis
The history of The Last Fox Story.

Moxie and Toxie Lay It On The Line (Table of Contents: 6)

Comic is refered to by Sam Zabel (the character) in this issue's Hicksville as the comic that got him fired and why he moved back to Hicksville.