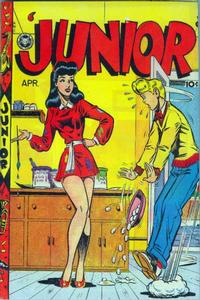 Genre
teen
Characters
Junior Hancock; Deena; Goofy Gordon; Gwenny; Deena's mother
Synopsis
Junior doesn't understand geometry so Deena and Goofy offer to help him out. At Deena's house Goofy and Deena fight over how to start and knock over an ink bottle, staining the rug. They try without much luck to remove the stain before Deena's mother sees it. In the end, it turns out it was "washable ink" and water would have taken it out just fine from the start.

As was common with Fox comics of this era, the first page of this first story was printed on the inside front cover. In this case, it is in red and black duo-tone.

Genre
teen
Characters
Junior Hancock; Deena; Junior's mother
Synopsis
Junior and Deena sell an antique picture frame in Junior's attic to get money to buy Goofy a birthday present. There is much confusion when Junior has to retrieve the picture after his Aunt Martha calls asking for it, not realizing that Deena switched the picture of Uncle Horace for that of a prize bull before she sold it.

Genre
teen
Characters
Goofy Gordon; Gwenny; Goofy's parents
Synopsis
Goofy and Gwenny read about a kidnapping in the paper and argue over a point of grammar in the ransom note. They copy the note to take to school to get the dispute resolved, but leave it out when they go to the movies. When they get back, Goofy tries to get an increase in his allowance out of his parents' distress, but of course it backfires.

Written in first person as if by Goofy. Has similar feel to the writing in the Al Feldstein-written/drawn 'Junior' stories.

Genre
teen
Characters
Junior Hancock; Deena; Goofy Gordon; Gwenny; Junior's mother; Junior's father
Synopsis
Junior and Deena fight over Junior not having enough money for a date. Goofy and Gwenny then see things that make them think Junior is joining the army, and tell Deena. She's upset and tells Junior's parents. But Junior's cousin had just been assigned to recruiting, and Junior was only taking a suitcase of laundry over to the base for him.

Genre
teen
Characters
Deena; Gwenny
Synopsis
Deena and Gwenny are having a little slumber party. Deena's mad at Junior, and as the girs get into bed they vow to not even look at any boys anymore to teach Junior (and everyone else) not to take them for granted. The next day at school all of the boys are all the more attracted to them now that they're completely unavailable. But Gwenny is attracted to a new older student who earned medals in the war. She and Deena break their vow and try to interview him for the school paper. But then he wants a copy of the picture they take to show his wife and kids.

Art is similar to Feldstein but different enough that it is probably someone else (no close-ups, facial expressions and effects are different).

Title is actually given with a largish black dot between Deena and Gwenny's names.