The Haunted Picture! (Table of Contents) 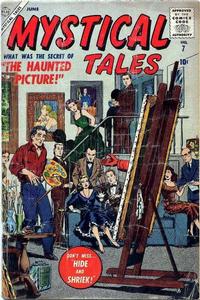 The Secret of the Haunted Picture (Table of Contents: 1)

Job Number
L-825
Genre
horror-suspense
Synopsis
An artist sells his soul to the Devil in exchange for one year of success. At the end of that year, he finds himself entrapped in one of his own paintings.
Reprints

Hide and Shriek (Table of Contents: 2)

Job Number
L-906
Genre
horror-suspense
Characters
George Karus; Joe Ricardo; Rita; Bill; Khala
Synopsis
A voodoo priest takes his revenge on a man who got him expulsed from his tribe by playing a practical joke.
Reprints

Forte credits by Michael J. Vassallo, 2002-12-03 (Per Sandell ed.), Job number and signature of artists from the Atlas Tales website.

The Living Shadows! (Table of Contents: 3)

Job Number
L-775
Genre
horror-suspense
Synopsis
A medium brings the spirits of two living people, a smuggler and his intended bride, to meet with men who want to dig up his hidden gold. The smuggler's body follows its spirit and snatches the gold out from under the men's noses and disappears but the spirit of the intended bride falls in love with one of the men. She meets up with him years later in the flesh during the London blitz.
Reprints

Wessler credit per biblio info published in Robin Snyder's The Comics Vol. 26, No. 4, April 2015.
Doug Wildey would use the same look for Chondu the Mystic in Tales of Suspense #9 in 1960.

It Happened in the Attic! (Table of Contents: 4)

Mystery Within The Walls (Table of Contents: 5)

Job Number
H-396
Genre
science fiction
Characters
Sam Catlett; Caspar; Ben Rump; Bill Rump
Synopsis
A local millionaire secludes himself from his old bowling buddies as he becomes wealthier, but they discover that he misses them so much that he has invented a robotic bowling alley.
Reprints

Too Smart to Live! (Table of Contents: 6)

Job Number
L-815
Genre
crime; fantasy-supernatural
Synopsis
A criminal comes across a prospector who develops amnesia from a fall and convinces the fellow that he's the wanted crook by switching wallets with him. His ruse works too well, however, as the prospector begins to act like the hunted fugitive he believes himself to be.
Reprints

The Man Who Can't be Stopped (Table of Contents: 7)

Job Number
L-765
Genre
science fiction
Synopsis
A man builds a machine that will let him experience the thoughts of all people everywhere in order to gain power, but his mind can't handle the overload and shuts down.
Reprints