No month or year of publication in indicia or on cover. Information from Overstreet Price Guide.
Listed as being now on sale in Famous Funnies (Eastern Color, 1934 series) #90, in the feature Let's Get into a Huddle, issue cover dated January 1942 (on sale date, December 16, 1941).
Issue #91 also promotes this comic in the same feature. Issue #92 also had a blurb on this comic in the same feature but mentions that time was running out to purchase the comic.

Buck Rogers Frees the Living Corpse from the Crimson Coffin in the Sky... (Table of Contents) 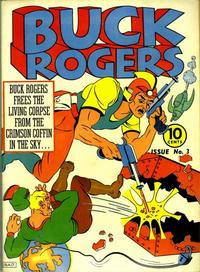 First Line of Dialogue or Text
Wilma and I were summoned to a mobilization...
Genre
science fiction; adventure
Reprints

Reprints of newspaper strips (dates have been removed)