[Classics from the Golden Age of Comics] (Table of Contents) 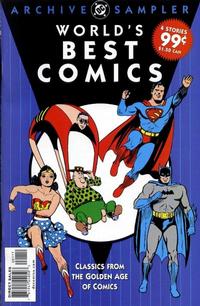 [The Construction Scam] (Table of Contents: 2)

In the story, Superman gives Lois Lane a blood transfusion.

The Riddle of the Missing Card! (Table of Contents: 3)

First Line of Dialogue or Text
The Batman, mysterious figure of night, who has matched wits...
Feature Logo

[The Brain of Cyrus Smythe] (Table of Contents: 5)