Published by Independent Comics Group and approved by The Staff of DC Comics. 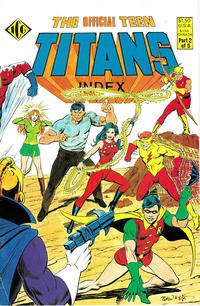 The DC Comics Index to the Teen Titans (Table of Contents: 1)

The consultants on the book were Jerry Bails, Dennis Mallonee, George Olshevsky and Gene Reed. The reviewers were Chuck Huber, Lou Mougin and Mike Tiefenbacher. The proofreader was Laura Webb and the Typography and production was by Tony Frutti.

An Explanation of the DC Comics Index (Table of Contents: 3)

Synopsis
An explanation in sections on the certain aspects of the series' overall look and layout.

Sections covered are, Cover Credits; Story Information; Characters; Chronology and a Personal Note from editor and writer, Murray R. Ward.
On inside back cover.