Issue includes a free code that can be redeemed for a digital version of the issue.
This issue is a variant of Tiger Division (Marvel, 2023 series) #1. There exist further variants: 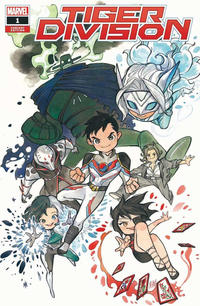 First Line of Dialogue or Text
I was riding a dragon above a sea of french fries...
Genre
superhero
Characters
Tiger Division [Luna Snow; Taegukgi; Lady Bright; Mr. Enigma; The General; Gun-R II; Ami Han [White Fox]]
Synopsis
The team is tasked with recovering stolen mystic artifacts but Taegukgi is distracted by visions of his late grandmother, and later with strange memory flashes from his past.

The character of Lady Bright was formerly known as Auntie Ante.

From the Desk of Director Han (Table of Contents: 4)