Night of the Reaper! (Table of Contents) 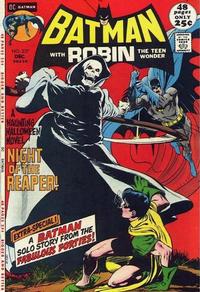 Night of the Reaper! (Table of Contents: 1)

Credits for script, pencils and inks confirmed from Julius Schwartz's editorial records, provided by DC Comics. Story based on ideas by Bernie Wrightson and Harlan Ellison, per Denny O'Neil's recounting in the letters section. Gerry Conway, Berni Wrightson and Alan Weiss are caricatured in story, as they attended the real Rutland Halloween Parade. Adams draws figures of Captain America, Thor, Spider-Man and Havok in the parade and later at a party.

Letters of comment from "The Cosmic Addict", Kevin L. Glennon, Kerry O'Conner, Barry Short and Christopher Juricich. Also includes a letter from Denny O'Neil who recounts the real life events that inspired "Night of the Reaper."

[The Screaming House] (Table of Contents: 3)

Editor's note in the final panel explains that this was Batman's last solo story before Robin debuted.