The Master of Time Meets the Masters of Space: The Protectors! Joe Guy, Kronos, Sherlock Holmes! (Table of Contents)

This cover was originally advertised as the cover for #6.  Since it featured 'The Protectors', who guest-starred in the Rook's strip, one could assume that their origin story was to have debuted in #6, but was delayed for some reason until #11, while their guest-starring appearance here was used to prime the pump for their own series. 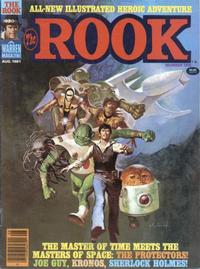 A Time For Love Lost! (Table of Contents: 1)

The previous Rook serial had set up some major changes in the Rook’s supporting cast and this issue’s story helped clear up some of the ramifications.

The Singular Case Of The Anemic Heir! (Table of Contents: 4)

Genre
detective-mystery
Characters
Sherlock Holmes; Dr. John Watson; Count Dracula; Mrs. Hudson; Cofty; policemen; nameless father
Synopsis
Sherlock Holmes is contacted by a mysterious stranger with a new case, but Holmes quickly dismisses him. He has deducted that the stranger is in fact a vampire. And not just any vampire, but Count Dracula himself. The final confrontation takes place in the Crystal Palace, where the augmented rays of the sun finally destroy Dracula.
Reprints
Keywords
1903; London; vampire

This story is not based on any novel by Sir Arthur Conan Doyle.