Lovewitch and the Living Dead (Table of Contents) 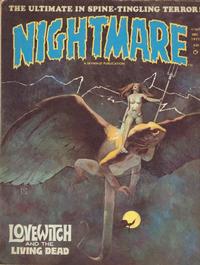 Includes a photo of and interview with Jeff Jones (Richard Arndt).

Love Witch and the Battle of the Living Dead (Table of Contents: 3)

Continued from Psycho #3. Several pages printed out of sequence.

The Living Gargoyle (Table of Contents: 4)

Story is unrelated to "The Human Gargoyle" series (Richard Arndt). The writer's name was spelled as Jerry Siegal in the credits.

Corpse by Computer! (Table of Contents: 7)

The Cosmos Strain (Table of Contents: 8)

Story credited to Steve Stern which is believed to be a house name. It appears nowhere else, nor for any other company and was used at Skywald only twice, with artists closely related through their fanzine work — Mike Kaluta and Jeff Jones. (Richard Arndt).