End of Summer (Table of Contents) 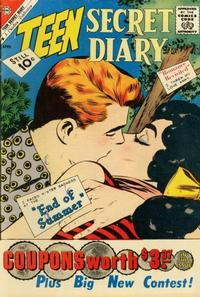 Job Number
A-99
Genre
romance
Characters
Grace Dunning; Dave Masters; Aunt Cara; Carl Huxley
Synopsis
Grace fills her diary with wonderful expressions of love spoken by Dave. At the urging of her aunt, Grace's diary becomes the basis for a successful career as an author. After years in the city, she finally comes to realize that she still loves Dave, but when she returns she discovers that Dave is now a married, family man.

Job Number
7244
Genre
romance
Characters
Sally Brady; Harold; June Melton; Kate Brady (Sally's mother)
Synopsis
All Harold can talk about is June Melton, a former neighbor when he lived in Milldale. Sally arranges for June to be her guest for the weekend and Harold discovers June has put on weight since they last met.

Job Number
A-164
Genre
romance
Characters
Tom Lowden; Sue Hansen; Perry Sykes; Sean; Claire Hadley
Synopsis
Sue breaks off her engagement to Tom because he is too controlling. She takes a trip to Chicago to see her college roommate, Claire. Claire is engaged to Perry and they seem to have an open relationship. Sue decides that too much freedom is not a good thing and she would prefer to belong to Tom.

The average number of copies of each issue sold or distributed during the 12 months preceding the date shown above: 115,940 (last two digits of this total are faded in indexer's copy and may be wrong).

End of Summer (Table of Contents: 6)

Job Number
7276
Genre
romance
Characters
George Haines; Milly; Cathy Mills
Synopsis
Milly and George meet on a summer vacation at Camp Sunopec. They vow their eternal love and, when the vacation ends, George tells her that he will come for her after he tells his parents. Days, then weeks pass, and Milly doesn't hear from George. Heartbroken, Milly assumes that it was just a summer romance for him. Then a friend of Milly's from the camp stops over as her family is driving through and mentions that George was killed in a car accident driving home from camp.

The cover art (with different coloring) is taken from the splash page of this story.