The Massacre Game! (Table of Contents)

Joe Maneely credit from the Overstreet comic book price guide, other source should say John Buscema but it seems to be very unlikely for a painting at this time not to mention the drawing itself. (Jim Vadeboncoeur and Michel Maillot from the John Buscema checklist). Cover art credit changed to Allen Anderson, authenticated by a list of Anderson's Ziff-Davis cover paintings in ILLUSTRATION MAGAZINE No. 18 Winter 2007 - Gene Reed 11/27/2010. 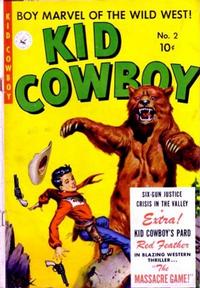 Crisis in the Valley! (Table of Contents: 2)

The Grizzly's Debt! (Table of Contents: 3)

The Massacre Game! (Table of Contents: 5)

Back cover. Credit from French magazine Back Up #14, as reported by Stéphane Petit (Ramon Schenk, July 2009).
The complete art infos come from the John Buscema checklist built by Jim Vadeboncoeur Jr and Michel Maillot.