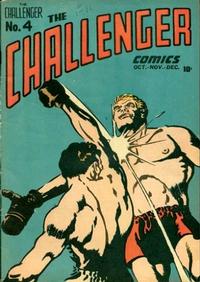 The Whirlwind (Table of Contents: 1)

Genre
sports
Characters
Whirlwind Wilson; Coach Tom Lee; Team Captain Dick Lambert; Mike Durant; Kelly; Sally Braden; Dan Giles
Synopsis
A football story where some of the white players of Jordan College pull a dirty prank on the only colored player (Wilson) which backfires and results in Wilson getting into the big game as their only hope for an upset victory against arch-rival Benson College.
Keywords
football

Story begins on inside front cover without color. The initials JKD appear on a radio microphone, perhaps the artist?

Characters
The Wedge (villain); Brett Halliday; Nazrab; Nazrab's son;
Synopsis
Story takes place in an unnamed foreign location where American businessman Halliday hires The Wedge to create labor unrest so that he can buy a factory mill for little money.

The Story of the Maccabees (Table of Contents: 5)

The Story of Gideon (Table of Contents: 6)

Death in the Sky (Table of Contents: 7)

Genre
adventure
Characters
Challenger Club of Thunderrock [Bob; Red; Bill; Joe]
Synopsis
The Challengers discover a hidden airfield runway that is being used by a gang of bank robbers to make their getaways.

All the lettering within the word balloons and captions is typeset.

Story ends on the inside back cover without color.

Mail in coupon and pledge for joining the Challenger Clubs of America and organizing local club chapters. Appears on back cover.