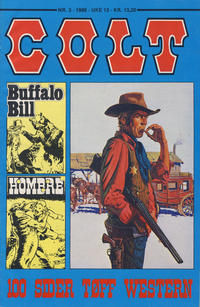 Part 2 of 4. The complete story, including 37 pages drawn by Pratt and his assistants in 1994, was printed in Italy in the book "Wheeling, il sentiero delle amicizie perdute" (Lizard, 1995).
Italy's first edition of Wheeling was published by Florenzo Ivaldi in 1972. It included previously unpublished drawing, sketches and watercolours by Pratt. Reprint info from Alberto Becattini.