Listed as "quarterly" in the indicia, but only this issue was published.

Five Miles Down (Table of Contents) 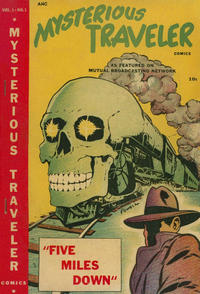 on inside front and back covers

Five Miles Down (Table of Contents: 2)

Per the fanzine, Fantasy Times (James V. Taurasi and Raymond Van Houten, 1941 series) #67 (July 1948), as reported by Art Lortie (10 September 2015) on the GCD-Chat discussion list, story is based on the radio episode "Five Miles Down." The show was broadcast twice (9 February 1947 and 4 July 1950) on the Mutual Broadcasting System and no known copies of the original broadcast episode appears to exist.

All information for this sequence from John Haufe, April 2008. Updated with possible artist ID August 2009.

The Mystery of the Five Fingers (Table of Contents: 4)

Adapted from the then "soon to be showing at your favorite theatre..." Eagle-Lion studio production by the same name. Staring Dennis O'Keefe, Raymond Burr, Marsha Hunt, Claire Trevor, John Ireland and Chile Williams.

See http://www.imdb.com/title/tt0040723/ for more information about the movie.

Take a Trip to India (Table of Contents: 6)