What a Fool Was I (Table of Contents)

Redrawn version of the splash panel for the interior story with this name. Dialogue is slightly different as well. 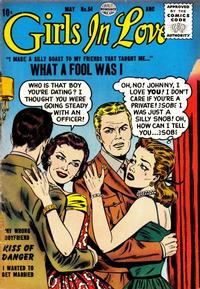 My Wrong Boyfriend (Table of Contents: 1)

This version has a revised splash panel (title and some text), has been re-colored, and most of the references to Stalin (who was now dead) and the Korean War (which was now over) have been removed, in text and art. There are other minor changes to the dialogue as well, most of which reduce the political content but do not change the basic plot.

What a Fool Was I (Table of Contents: 2)

Kiss of Danger (Table of Contents: 3)

Is Love the Loser? (Table of Contents: 4)

I Wanted to Get Married (Table of Contents: 5)