Editing
A. A. Wyn (publisher) 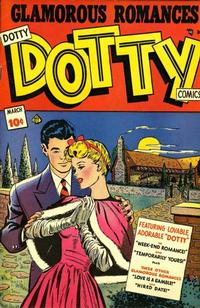 Temporarily Yours (Table of Contents: 1)

Dotty's various fashions are credited to different readers in small text boxes in the story.

Genre
romance
Synopsis
Joan promises her friends she will bring her imaginary boyfriend Jeffrey to a company function, then pays a guy she meets on the street to pretend to be Jeffrey.

Love Is a Gamble! (Table of Contents: 5)

Vince Fago credit suggested by Jerry Bails' Who's Who. Could also be Red Holmdale, but doesn't resemble artwork in Sorority Sue story in Dotty #36.

Synopsis
Win a cash prize for writing 50 words or less on which character you like the best and why.