Editing
A. A. Wyn

Last issue as "Dotty", continues as "Glamorous Romances" with issue 41. 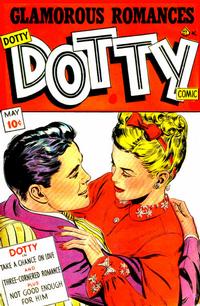 Take A Chance on Love (Table of Contents: 1)

Genre
romance; teen
Characters
Dotty; Del Tremaine
Synopsis
Dotty starts dating Del Tremaine, but dumps him when she realizes he is a coward.

Much more serious than previous Dotty strips, more like a traditional romance strip with Dotty put into the lead role.

Not Good Enough for Him (Table of Contents: 3)

Dotty appears in the first panel only, introducing the strip. Her logo does not appear in story.

More like a straight romance story than a Dotty story.

Synopsis
Statement of Ownership. No circulation figures and only A. A. Wyn is mentioned by name.

A Kiss in Time (Table of Contents: 6)

Genre
romance
Characters
Janet Gray; Van Carlton; Henry
Synopsis
Janet is dating Henry when Van Carlton, the millionaire, starts showing an interest in her. But is he really Van Carlton, or just an imposter?