Info by Craig Delich (Nov. 2005). This issue was printed in black and white, and reprinted the Captain Marvel stories from Whiz #10, Special Edition Comics #1, Whiz #8 and Whiz #11.

While the cover is new, the insides feature reprints of stories found in Whiz Comics #8, 10 and 11, plus Special Edition Comics #1.

Paul C. Hamerlinck says, in Alter Ego #130 (January 2015), that Captain Marvel co-creator C.C. Beck told him that he had penciled this cover and that Pete Costanza had inked it. 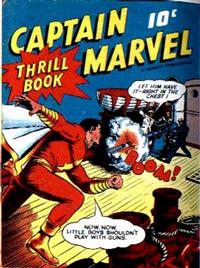 The Winged Death (Table of Contents: 1)

Genre
superhero
Characters
Captain Marvel [Billy Batson]; Sterling Morris; un-named Admiral; Dr. Thaddeus Bodog Sivana (villain); Beautia Sivana [as Dot Darling] (villain); Knuckles Nickerson (villain)
Synopsis
Billy is concerned over the mysterious destruction of many of the U.S. west coast defenses, and when he is assigned to look into the matter, he uncovers the infamous Beautia posing as a newsreel cameraman, and figures that she is behind this situation.
Reprints
Keywords
Ace Films; Shazam; Station WHIZ

[The Menace of the Skull] (Table of Contents: 2)

Genre
superhero
Characters
Captain Marvel [Billy Batson]; Princess Patricia (performer); Mrs. Moneypenny; Horace Moneypenny (husband of Mrs. Moneypenny); Captain Death (villain, introduction); Professor Skull (villain, introduction)
Synopsis
Billy discovers a connection between accidents occuring on the beach and the presence of a strange yacht anchored nearby. He discovers that wealthy people have disappeared and are being held for ransom......then the victims would be killed once the family has been bled dry.
Reprints
Keywords
Shazam; Station WHIZ; The Skull (a yacht)

The Haunted House (Table of Contents: 3)

Except for the masthead, Captain Marvel wears no cape in the story.