Index created from information provided by Lou Mougin through the GCD Error list and a scan from http://goldenagecomics.co.uk/.

Kriegstein is credited with pencil and ink on Golden Arrow by Jerry Bails' Who's Who. The horse here is like his horses in Target Comics v8-#2, Also the face and long peculiar boots. 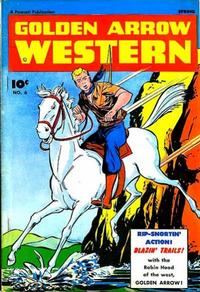 Coming Straight at You! (Table of Contents: 1)

Sheriff for a Day (Table of Contents: 2)

Kriegstein is credited with pencil and ink on Golden Arrow by Jerry Bails' Who's Who. The inaccurate horses with short tail, long neck and spider legs, are his. Also hats high on the head, and high, tight boots that look like socks, and the faces with open gaping, round mouth are all some of Kriegstein's marks.

Copped by the Cops (Table of Contents: 3)

A Man to Remember (Table of Contents: 4)

The Black Marauder (Table of Contents: 6)

The Hide-Out (Table of Contents: 7)