The Frontier Phantom (Table of Contents) 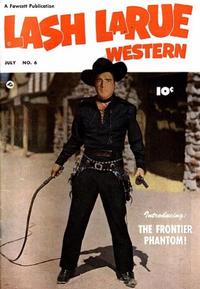 Yes, We Have No Bananas (Table of Contents: 1)

Artwork very similar to original scan from "Jed & Ned" in Jerry Bails' Who's Who. Art ID by Steinar Ådland January 2011.

The Frontier Phantom (Table of Contents: 2)

Genre
western-frontier
Characters
Lash LaRue; Banker Tilson; Sheriff; Deputy Hyar; Big Tim Crone (gambler); Frank (gunman); Sandy (gunman); Doctor Fred Kure; Frontier Phantom (twin brother)
Synopsis
Has Lash LaRue, the roving marshal turned outlaw? If not, who is the man in the doctor's office? The answer can be found in the nearby hills where the real Lash lies battered and unconscious in the brush. He has been drygulched and his clothes stolen.
Reprints

The Gold Mine Murder (Table of Contents: 4)

Genre
western-frontier
Characters
Lash LaRue; Whitey (miner); Jud (miner); Bill Shotten (crooked lawyer);
Synopsis
The two miners borrow money from Lawyer Shotten to fix their mine, but the crooked lawyer intends to take over the mine by framing Jed for murdering his partner.

Compared with artwork in Ranger Comics # 41, credited to Doyle, this is identical on his incredibly awful horses. Just that is enough, but the awkward movement of people running is also identical to his art in other credited comics in GCD. Art ID by Steinar Ådland January 2011.

First Line of Dialogue or Text
Doc Steed had his problems, and they were not all medical by any means.
Genre
western-frontier
Characters
Doc Steed; Doc Millingham; Rex Monarch; Mary Lou; Ephraim Teller
Reprints

First Line of Dialogue or Text
Mail robbers were among the worst menaces of the old West. All lawmen, including the fearless Roving Marshal Lash LaRue, were always on the look out for these dangerous outlaws.
Genre
western-frontier
Characters
Lash LaRue; Chief Mashal; Raige (outlaw); Cinner (outlaw); Jack Distler; Stranger

Genre
western-frontier
Characters
Lash LaRue
Synopsis
Photo of Lash with his lash, listing some of his movies.