At Last--The Assassin! (Table of Contents) 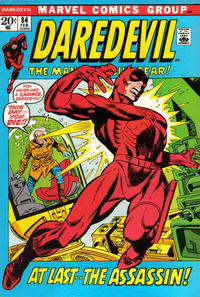 Night of the Assassin! (Table of Contents: 1)

Job Number
754 Z
Genre
superhero
Characters
Daredevil [Matt Murdock]; Black Widow [Natasha Romanova]; Foggy Nelson; Ivan Petrovich; Mr. Kline [MK-9; Assassin]; (villain, death]; Baal (villain, death); Scorpion Android (cameo); Mr. Hyde Android (cameo)
Synopsis
The Widow is in Switzerland when she is approached by a doctor who claims to be able to restore sight to the blind. She sends for Matt, who arrives to find that things aren't exactly what they seem. Daredevil and the Widow take down the time-traveling Assassin and end the threat of Mr. Kline and Baal to unmake the future.
Reprints

The Sensuous Bullpen (Table of Contents: 2)

Stan's Soapbox tries to explain all the recent price changes. A short article is reprinted from the Sunday supplement magazine Parade from August 1, 1971, which mentions Marvel's popularity on college campuses. Tomb of Dracula and Marvel Premiere are new magazines. John Romita, Marie Severin, Herb Trimpe, and other Bullpen personnel participated in an art program for underprivileged children held at the Guggenheim Museum in New York. Al Kurzrok is back from a trip to Haiti. Barry Smith is taking a vacation trip back to England. Also the Mighty Marvel Checklist of Marvel comics "now on sale!"