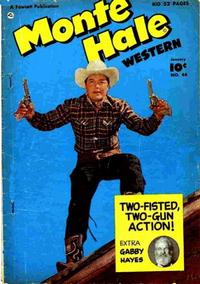 Overland to Oregon (Table of Contents: 2)

Statement of the Ownership, Management, Circulation (Table of Contents: 4)

Put More Opportunity in Your Future... (Table of Contents: 7) (Expand) /

The Orphan's Return! (Table of Contents: 8)

The art here is identical to the Pfeufer's Mix story in Western Hero #105.

The Man from Texas (Table of Contents: 9)

The action here, the jeans and boots of Monte, and peculiar gunsmoke with a hole in the middle are mostly found in Pfeufer's stories. The inking must be by John Jordan, as it matches quite well his signed work on "The Cadet" in Target Comics #8, 1943.

Quiz: How well do you know your marines (Table of Contents: 10)

Ozzie and Babs (Table of Contents: 12)

Two more Comix Cards in the series. These both feature Ozzie and Babs, appearing in Master Comics every month.

Frank some peculiar faces with long eyebrows, wrinkling nose, very small round mouths, and folds in clothing that are very scribbly with many short lines, as if there is nobody inside.

The Buffalo Skinners (Table of Contents: 16)