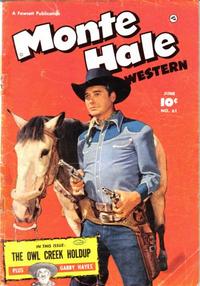 Genre
western-frontier
Characters
Monte Hale; Pardner (horse); Sheriff Ray Evans
Synopsis
Coach after coach limped back into town with tales of having been ambushed and robbed on Owl Creek Bridge.

Edmond Good is best spotted by his quite rounded faces with very visible eyes and lively layout with much movement.

Now You Can Get Monte Hale Western Each Month, By Mail (Table of Contents: 5) (Expand) /

Gains Fame in Race With Flame (Table of Contents: 7) (Expand) /

The Flying Foe (Table of Contents: 10)

Frank has some peculiar faces with long eyebrows, wrinkling noses and very small round mouths and folds in clothing that are very scribbly with many short lines, as if there is nobody inside.

The artwork has a bit of similarity to Pfeufer's Tom Mix stories: movement, gunsmoke with hole in the middle, tight jeans with few wrinkles.

Killer of the Caribees (Table of Contents: 16) (Expand) /