Murder in the Hills (Table of Contents) 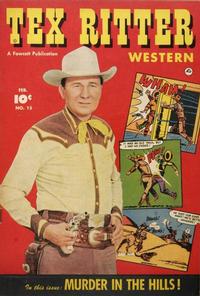 Not Backwards (Table of Contents: 1)

The artwork is very similar to his signed [as Mark Howell] stories "Black Fury and Chuck" in Fantastic Comics (Fox, 1939 series) #22 and 23. Especially the peculiar highlighted pupils in the eyes in close up, that looks like tiny black horseshoes.

The Strange Festival (Table of Contents: 2)

Genre
western-frontier
Characters
Tex Ritter; White Flash (horse); Juan Juarez (foreman); Hank Millars (crooked prospector)
Synopsis
An old prospector once left Juarez half a map leading to a gold mine, and now he has met a prospector who owns the other half of it. They form a partnership, but one of them wants it all.

The movement of the figures, and the small narrow eyes far apart are identical to the credited Pete Riss story in Adventures into the Unknown (American Comics Group, 1948 series) #44 and the quite accurate horses are drawn exactly the same way.

The Tall Tale of the Tiny Tourist! (Table of Contents: 3)

First Line of Dialogue or Text
This month I'd like to say something about a matter which every cowhand knows.
Genre
western-frontier
Characters
Tex Ritter
Synopsis
How to handle a rifle.

Same art as the main story.

Genre
western-frontier
Characters
Clam O'Reilly; Sheriff Simms; Luke (outlaw); Shorty (outlaw)
Synopsis
Clem sneaks out of town when he hears he has to make a speach after catching six stagerobbers.

Now You Can Get Tex Ritter Western Every Other Month, By Mail (Table of Contents: 7) (Expand) /

Murder in the Hills (Table of Contents: 8)

Genre
western-frontier
Characters
Tex Ritter; White Flash (horse); Fury (dog); VILLAINS: Deke; Caldwell; Burns
Synopsis
After a goldrobber is caught by Tex, he signs a full confession with the names of the other two robbers. When taken to the jailhouse, the prisoner is killed.

Notes as for the first story, but the inking is quite different here.

Fawcett Comics Are The Finest (Table of Contents: 13) (Expand) /