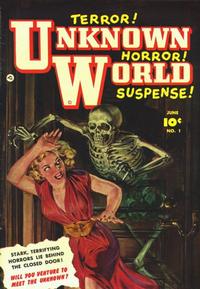 The Sea of the Dead (Table of Contents: 1)

Genre
horror-suspense
Characters
Captain Bullard
Synopsis
Captain Bullard comes aboard a ghost ship and learns he is on his final journey. The other passengers are the victims of a seafaring tragedy Bullard caused years ago.
Reprints
Keywords
ghost ship; skeleton

The Quiet One (Table of Contents: 2)

Genre
horror-suspense
Synopsis
Mr. Kimler spies on his neighbor Mr. Momer. A fatal mistake, for Mr. Momer is not what he seems to be.
Reprints

The Serpent Queen (Table of Contents: 3)

The art is identical to McCarty's signed stories in Black Magic #16, and some credited samples from Atlas Comics. He is best recognized by his faces with big eyes that can look like George Evans.

Footprints on the Ceiling (Table of Contents: 4)

Genre
horror-suspense
Synopsis
The gangsters O'Flaherty and Flitcher train a revived dead dog to be a trick dog on stage. But they have to fight off hordes of skeletal zombies coming after them to bring the dog where it belongs - in the province of the dead.
Reprints