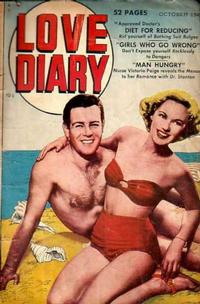 I Was A Poor Imitation (Table of Contents: 1)

Genre
romance
Characters
Laurie Brownell; Eddie; Mrs. Brownell; George Lynn; Ted Carter; Jock Welles; Joe; Helen
Synopsis
Stenographer Laurie wants to improve her station in life. She spends her savings on a vacation at the swanky Green Meadow Inn, posing as a wealthy young woman. Laurie is attracted to band leader Jock but thinks rich Ted might be a better husband. Laurie’s imposture is exposed and Jock dumps her, so she agrees to elope with Ted. But Ted reveals himself to a be a gold-digger and drops her as well. Returning to her working class life in the city, Laurie is surprised when Jock appears and declares his love.

Second in a series of stories about nurse Victoria Paige and her boyfriend Dr. Jim Stanton.

Tone Up Time (Table of Contents: 4)

Synopsis
Exercises you can do to rid yourself of bathing suit bulges.
Reprints

Synopsis
Variety of healthy recipes for each day of the week.

I Was Jealous of My Love (Table of Contents: 6)

Genre
romance
Characters
Frank Chase; Laura Wayne; Marian Evers
Synopsis
Secretary Laura falls in love with newspaper columnist Frank but she is jealous of his many female acquaintances. She promises to change and they get engaged but Laura spots Frank with performer Marian and thinks he’s cheating on her. Frank says Marian was helping him pick out a birthday present for Laura. They break up. Frank moves away and eventually marries Marian. Laura is left alone.

The name of the character "Marian" is spelled "Marion" multiple times.

"I Met a Man About Town" in Romantic Confessions (Hillman, 1949 series) vol.1 #5 (February 1950) has a virtually identical story (even down to the occupation of the male protagonist).

Synopsis
Letters to Ray Mann regarding love problems and advice.

Genre
romance
Characters
Beth Morgan; Donald Peters; Miss Miller; Sharon; Roger Morgan; Mrs. Morgan; Margo Raymond; Mal Harris
Synopsis
Stenographer Beth goes through life lying to her friends and acquaintances. When she meets hotel manager Donald, she continues her practice of lying, even telling him her father is an alcoholic, to cover a previous lie. This backfires when the older man is found unconscious and assumed to be drunk, when he was actually hit by a car. Beth admits her lies to Donald but he says she’s learned her lesson and he still loves her.
Reprints