On sale date from arrival date penciled on cover. 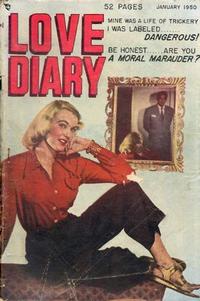 I Lied To My Heart (Table of Contents: 1)

Genre
romance
Characters
Mona Martin; Jerry Gibson; Edna; Miss Douglas; Louise Hammel; Helen Forest; Mr. Martin; Mrs. Martin; Professor Hammond; Ramon Laverne; Frances; Hal Wallace
Synopsis
Mona refuses to accept losing in any endeavour; turned down by singing teacher Hammond because she doesn’t have operatic potential, she hires phony Ramon as her voice coach instead. Mona meets jazz musician Jerry and they fall in love, even though she thinks “jazz isn’t real music.” Mona breaks up with Jerry when he says her voice isn’t good enough for opera, but a disastrous recital convinces her of the truth. Mona goes to work as a waitress and confesses her failure to her parents. Jerry is waiting for her and they reconcile.
Keywords
jazz; musician

Mona refers to Jerry as a "cornet player" but he is shown playing a trombone.
Writing credit per Martin O'Hearn at http://martinohearn.blogspot.com/2015/01/dorothy-woolfolks-early-entries-i…

Miss "X" the Girl Without a Past (Table of Contents: 2)

Fourth in the series of Victoria Paige-Jim Stanton stories, complete with repeating supporting characters Sally (switchboard operator), Rocky (ambulance driver), and Miss Edson (head nurse).
The "Movie Crazy" story in this issue is a spin-off of this series, focusing on Sally and Rocky.

Be Honest--Are You a Moral Marauder? (Table of Contents: 3)

"Ray Mann" was the "Love Diary" advice columnist in previous issues but this is the first story in which he appears as narrator and a character. A cash prize was offered to the reader who sent in the best letter in response to this story.

Genre
romance
Characters
Sally Weeks; Rocky Riordan; John J. Sterling II; Paul Cranston
Synopsis
Hospital telephone operator Sally dates ambulance driver Rocky, but she wants someone more “couth,” like the handsome leading men in movies. She goes to the swanky Hartsville Country Club for her vacation. She falls for Paul, who strongly resembles film star Ray Clelland. However, she discovers Paul is just an auto mechanic and he is disillusioned that she’s just a switchboard operator. Sally decides Rocky is at least sincere, if not high-class.

This story features two supporting characters from the Victoria Paige-Jim Stanton series. Ambulance driver Rocky's last name is given here as "Riordan," whereas in this issue's story “Miss “X”: The Girl Without a Past!” he is called Rocky "Doran."
Writing credit per Martin O'Hearn at http://martinohearn.blogspot.com/2015/01/dorothy-woolfolks-early-entries-i…

I Hated Men (Table of Contents: 7)

Genre
romance
Characters
Ann Joyce; Mrs. Marie Joyce; Mr. Tom Joyce; Edith; Jim Turner; Paul Rudyard
Synopsis
Ann grows up in poverty, after her father abandons her and her mother. Ann works her way up to a high position in the advertising business. A confirmed “man hater,” Ann schemes to steal an account from Jim by flirting with businessman Paul. Ann’s father reappears, having remade his life, and is reunited with Ann’s mother. Ann realizes she really loves Paul and confesses her double-dealing to him. He forgives her and they will be married.