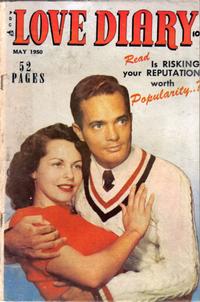 Genre
romance
Characters
Kathy; Janet; Mother; Joe Barker; Stephen Longwell; Peggy
Synopsis
After her father’s death, Kathy goes to work and becomes a success in business. She moves with her mother and younger sister Janet to a better part of town and puts Janet in a private school. She also urges her boyfriend Joe to improve himself and they break up as a result. Kathy dates business acquaintance Stephen and likes him, but her domineering ways turn him off. “You’re a little dictator!” When her mother and sister also rebel, Kathy vows to change her ways and reconciles with Stephen.

First Line of Dialogue or Text
Too many times, we are our own worst enemies!
Genre
romance
Characters
Ray Mann; Arlene Parker; Johnny Hale; Ted Cushing; Myra Sanders
Synopsis
Johnny takes Arlene to the prom and she jumps to the conclusion that he loves her. Feeling suffocated, Johnny breaks up with her. When Ted asks Arlene out, she once again thinks they’re in love and becomes jealous when Ted introduces her to Myra. Ted rebukes Arlene for her possessiveness, saying Myra is in fact married to a friend. Arlene comes to Ray Mann for help, and Ray asks readers of “Love Diary” to send in their advice.

Genre
romance
Characters
Janie Blake; Mrs. Woolrich; Alan Woolrich; Helga; Steve Clemons; Sally; Medford; Mrs. Moran
Synopsis
Janie is a skilled stenographer but repeatedly loses jobs due to her brash attitude. Unable to find another office position, she becomes a maid for wealthy Mrs. Woolrich, whose son Alan finds Janie attractive. Janie clashes with the other servants, including handsome chauffeur Steve. When Alan makes a pass at her at a dance, another guest knocks him out. Steve and Janie fall in love, but she’s fired and he thinks she encouraged Alan’s advances. A humbled Janie applies for a stenographer’s job, only to learn her employer would be Steve, now a practicing attorney. They reconcile.

Is Risking Your Reputation Worth Popularity? (Table of Contents: 4)

Too Sure of My Man (Table of Contents: 5)

Genre
romance
Characters
Sally Weeks; Rocky; Miss Gaye; Miss Crawford
Synopsis
Hospital switchboard operator Sally sees her steady boyfriend Rocky out with another woman. She signs up for an expensive makeover at the Gaye Glamor School. Rocky prefers the old, normal Sally and explains that the “other woman” he was seeing was his instructor in first aid at the nursing school. Passing her course means he’ll get a raise.

Hospital switchboard operator "Sally Weeks" appeared as a minor supporting character in the "Victoria Paige--Dr. Jim Stanton" stories in Love Diary 2-5. She was also the protagonist of "Movie Crazy" in Love Diary 4. However, "Too Sure of My Man" is the first story which has a "Sally Weeks" logo and would suggest this might have been intended as the beginning of a continuing series.

Genre
romance
Characters
Francine; Carlo; Dr. Louis Nason; Papa
Synopsis
Francine and her father run an inn at the base of Mt. Alrest. Francine and Carlo are in love, but when her father dies in a climbing accident, she blames Carlo. Guest Louis proposes to Francine and jealous Carlo challenges him to climb the mountain. Louis returns from the climb, saying Carlos is stranded on the peak with a broken leg, and a storm is approaching. Francine, realizing she loves Carlo, leads an expedition to rescue him.
Keywords
mountain climbing; mountaineering

This is a relatively rare romance comic story with both a foreign (non-USA) setting and a cast of characters which doesn't include any Americans. Although the setting is not specified, it is presumably somewhere in the Alps.